In April 2020 Open Social wanted to do its part to bring people together online at a time when we were all driven into isolation by the first wave of COVID-19. Because our speciality is in creating online communities, we decided to give away a year of free service to anyone who wanted to set up a community that would help alleviate some of the hardships that we all had to face at the beginning of 2020.

One of the people who took us up on that offer was Rai Waddingham who runs Behind the Label Training & Consultancy from Loughborough in the UK. After four months of running her Open Social community called Growing Pearls, we decided to talk to Rai and find out more about what she has been doing with her online community throughout the year.

A: Can you tell us a bit more about yourself and what you do?

R: I’m a mental health practitioner and a PhD student (of all things!). I’m also a survivor of mental health issues. So, a lot of the work I do is in the survivor activism community trying to make a difference and make sure that more people have the kind of community support that they need.

R: For years now I’ve been travelling the world and doing mental health-related training. I’ve been doing training everywhere! From Australia to the Netherlands, America and loads of different places.

But obviously, COVID completely stopped all of that. And what’s worse is that, in these challenging times, there is now an even greater need for mental health awareness and community. So, Growing Pearls came out of my wish to connect with people and to provide my training in a way that they can actually get access to it.

A: So the idea started with a website, but then grew into an online community. How did that come about?

R: I felt that people also really wanted a sense of community and to feel less alone at the moment. I wanted to do the courses, but also have a space where people could connect with each other and share resources and share ideas in a way that isn’t like Facebook.

A: I guess this is a good reason not to use something like Facebook Groups. Because people are sharing things that are very personal and important to them.

R: Exactly. Data privacy is really important. So I think more people are getting more worried about what is happening with their private data on, for example, Facebook.

A: Talking about creating a safe and communal space for people online, is this specifically important during COVID-19?

R: I think the world feels very hostile to a lot of people at the moment. So I feel that it is important to create this more supportive, generative community where we talk about how to make changes in our lives, how do we support each other and ourselves. In a time when we’re more physically isolated, creating welcoming spaces online is even more crucial.

R: So the idea behind Growing Pearls is really about creating this garden space, this generative space. So you’ve got The Garden which is open access. It’s free and I don’t restrict who joins. And in The Garden people can share articles and ideas. That’s been kind of cool.

And then if people want to learn something then they go into The Greenhouse, which is where my courses are. They can then access these for three months as they develop their skills and understanding.

Then there is The Kitchen. So after they graduate they can go into The Kitchen and think about how they can implement the learning in their everyday life.

And now we have Campfire Circles. This is a space created because people wanted a place where they could talk about specific issues in a more intimate space. So there is one for people like me who are survivor researchers: people with lived experience who are also academics. So we have our own Campfire Circle. Other circles come up whenever people have a need for them.

What became clear was that I really needed a structure, because I knew I wanted this learning platform but I needed something that made sense. So I went to the drawing board and thought: “What’s my metaphor? What structure do I need?”

The idea of having these Groups and things like The Garden and the Campfire Circles came out of the platform giving a group-based structure in Open Social. The community aspects of the space have been influenced by the nature of the platform too – it enabled me to think a bit wider than just sharing my courses.

A: How did you decide on using Open Social to build this community?

R: So I had the idea of just getting my courses out there initially. I tried to do it via my WordPress website initially. It kind of worked okay with embedding the Vimeo videos and other things, but it took a lot of effort to maintain. And it’s not the nicest space for discussion using the commenting facility in WordPress.

So, I was looking at everything from Discourse to maybe creating a forum. But forums can be very clunky and hard to log into. So I tried a lot of different things. And then I found Open Social through Google. I thought “This looks great!”.

Luckily, there was an offer for people doing socially responsible projects during the COVID crisis and Open Social was kind enough to offer me use of it for a year which made this all possible.

A: What was the platform setup process like, was it tricky to get started?

R: I think initially it’s always daunting when you see a new platform because it has its own language. It took me a little while of looking through Community Talks trying to understand the difference between things like Topics and Pages. It took probably a day to immerse myself in it, and also look at some of the other people’s platforms and see what they have done.

I should say, one of the things that really helped was the onboarding meetings with Open Social. I think everyone I have spoken to and the tech support has just been so cool and really friendly.

A: Open Social allows you to create customized Landing Pages, and decide what to put on there for visitors. How has this helped you build Growing Pearls?

R: I love the Landing Pages. They’ve proved to be really useful.

Working out what a Group would be and what a Landing Page would take a bit of writing and drawing. Once I got my head around it, it was actually remarkably easy. 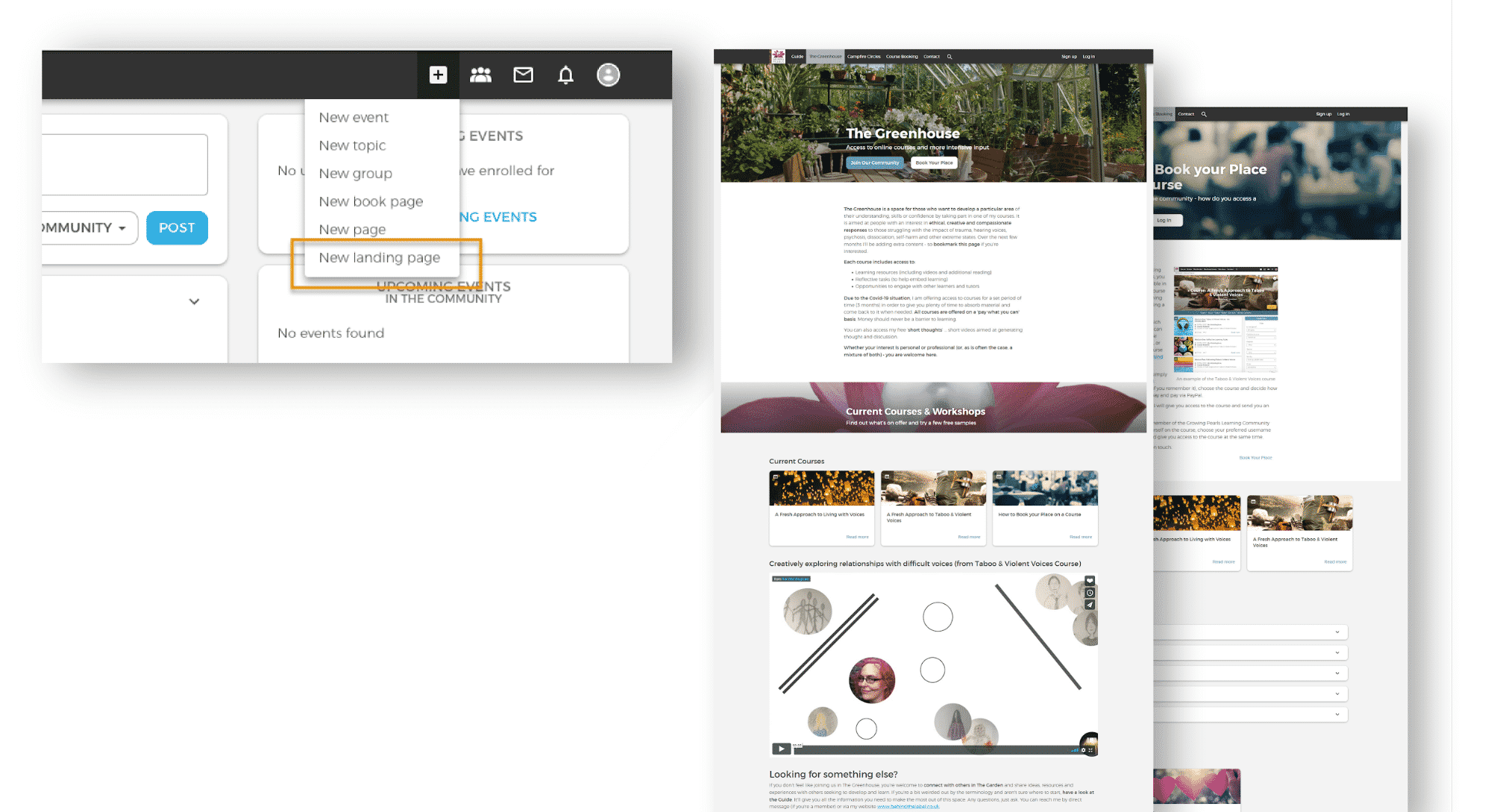 So, my Greenhouse isn’t a Group, it’s just a Landing Page. And then my courses are the Groups. But the person accessing the site doesn’t know that. They just know that Greenhouse is a space.

A: How long has Growing Pearls been online now, and in that time, how has the community developed?

R: I’m actually just looking at the community now so that I can see. Oh wow, it was only four months ago! So, it’s been going for four months. It’s got more members now than I’d initially imagined.

What I think is lovely about it is that people have just in the last month really start to use it and create Topics and take a bit of agency, and support each other and share the information which is great to see.

A: Seeing as you initially wanted to set it up as a training platform, how have the courses gone?

R: I know so many of us are worried about money at the moment and I don’t like the idea that information should be restricted to those with money. So I chose to offer my training on a pay-what-you-can-afford basis.

I have been shocked that people have actually been paying for the courses. So some people pay nothing. Some people pay a hundred pounds. And others anything in between. And I think part of that is because the platform just looks gorgeous. The feedback that I’ve got from participants is that it looks really nice and feels really nice to use.

I think this is partly because of the structure that you at Open Social give, and partly my way of structuring the content and the graphics and branding. These things work really nicely together.

I also finally hit upon a way for people to engage with the courses because people have been watching the material, but not discussing it. So I simply put it in a structure that requires people to engage with every module. And people have started doing that. And some of the comments that have been coming up are just beautiful and show that people are really listening, not just to my content but they’re also listening to each other.

A: That must be really encouraging. Given your success so far, what is the next step for Growing Pearls?

R: I’ve only got two courses up at the moment. So, my next step is to actually get some more courses and to continue to try and get people to engage with it.

My hope is that it will become a thriving community in which people are really taking part.

A: It sounds great what you are doing. Maybe in a year’s time, we can do another interview and see what has happened?

R: You’ll see that we have taken on the world, and you’ll see all these bubbles of greatness popping up everywhere!

We want to thank Rai for taking the time to talk with us about Growing Pearls and using Open Social. We wish her and her community all the best!

Do you have a story to share with us? Contact us and inspire others with your online community!

We are always excited to see how people are using Open Social to change the world. Because Open Social is #MadeToShare.