Should Hyves come back? This is a question being asked in The Netherlands. In recent weeks, the #deletefacebook hashtag gained popularity after Facebook allowed the personal data of users to end up in the hands of Cambridge Analytica, a political consultancy for Donald Trump’s 2016 election campaign.

The Netherlands experienced a major retaliation when popular Dutch comedian Arjen Lubach launched #ByeByeFacebook and removed his show “Zondag with Lubach” from Facebook and urged others to follow. And although it’s hard to tell how many fans followed, a rough 11,000 people stated that they would do the same.

In response to #deletefacebook Taco Potze, co-founder of Open Social, also felt that it was time for a Facebook alternative. 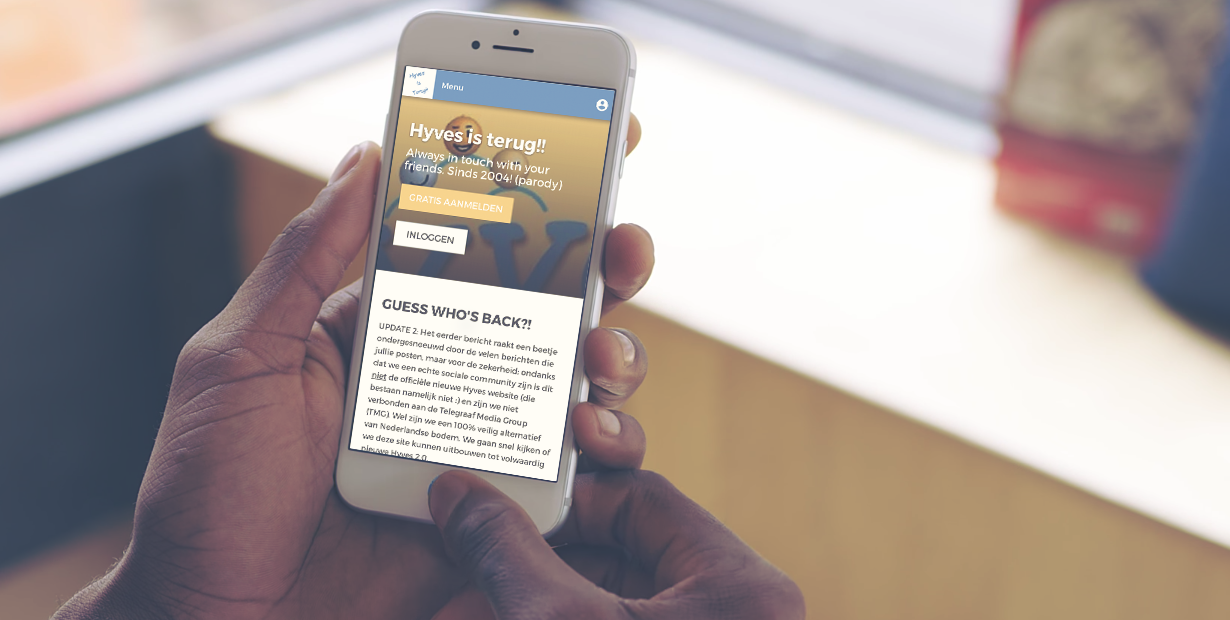 On the 12th of April, Taco Potze, co-founder of Open Social, used Open Social’s own community software to create a parody of Hyves, a widely popular Dutch social media platform from 2004 until 2013. The old Hyves had charm. The local online community connected over half of the population in The Netherlands in social solidarity, and the Dutch are calling for Hyves to return.

We thought the same. When hyvesisterug.nl was created, it was intended as both a safe alternative to Facebook and a fun experience, or so we thought… In just a few hours, the community gained traction, growing by two users a minute! By the morning, the number had risen to over 1,000 enthusiastic users. N.B. This platform is not Hyves and is not connected to the Telegraaf Media Group (TMG).

The enthusiasm towards an alternative to Facebook is loud and clear. We aren’t alone in our efforts to find alternatives for Facebook and the old Hyves. Patrick van der Nat and Joas Hoogendijk, founders of the non-profit social media organization Origen, are trying to bring Hyves back with their campaign ‘Tijd voor Hyves’. They want to create their own social network, call it Hyves, and re-establish the social values that came along with it.

Our job is to build online communities, we do that for Greenpeace, for example. As a joke, we built Hyves this week. We just didn’t expect it blow up like this.

The world needs more local and private communities. With all the rage around Facebook, people realized that we’ve lost both our democracy and privacy to the social media giants. Instead of a creating a place to come together, users are viewed as commodities. Now, especially, there is a desperate need for social platforms that have privacy at the forefront, where users can feel safe and at home. But what kind of alternatives are out there?

Online Communities
Online communities are a logical replacement for Facebook. They offer a safe online space where like-minded members can interact. We would rather see the internet full of open and unique communities where people can connect away from the online clutter.

MeWe is just one of the many examples of companies are creating social media alternatives. They call for a privacy revolution and pride themselves on creating a social community geared towards safety and interaction above all else. Tada is another movement fighting for the responsible use of data. They are a group of diverse professionals from the Amsterdam Economic board that encourage digitally responsible cities.

For example, DTube is a blockchain platform that is similar to YouTube. Only instead of advertisements, users can monetize through direct contributions to the platform. Matchpool is equally embracing the blockchain model, and their decentralized matchmaking technology connects users with similar interests. They even have their own native currency called Guppy.

Open Social has also recognized the enormous potential for blockchain and communities. We are currently experimenting with decentralized technologies to see how to improve community experiences. Stay tuned for more information.

The future of online interactions still looks promising. Would you like to have a Hyves 2.0? Let us know in the comments!

Who are we? Open Social is an online community solution for nonprofits and innovative companies. We help customers like the United Nations, Greenpeace, and hundreds of smaller organizations connect with their employees, members, and volunteers.

GoalGorilla and Open Social are still using Facebook because we believe it is important to be involved in the open dialogue about its use and alternatives. Starting in April, we removed all Facebook tracking from both GoalGorilla.com and GetOpenSocial.com.