DrupalCon North America: A Digital Experience Conference with the Help of Open Social

Drupal is one of the biggest open-source software projects in the world, with DrupalCon being the — continue reading

Drupal is one of the biggest open-source software projects in the world, with DrupalCon being the key event for the Drupal community. Over the last year, however, we have had to pivot from in-person events twice a year to running virtual events. While we used another software package to facilitate the online events for the main part of the conference, what we wanted to do with the Contribution events was to create a separate platform for those who wished to collaborate on Drupal open-source software initiatives during the conference.

We spoke to the people at Open Social, who also use Drupal for their online community software, and we decided to build an Open Social platform for the DrupalCon Contributions events. 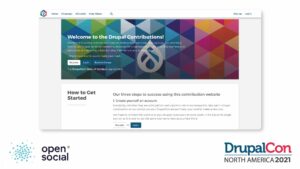 Using BigBlueButton’s video conferencing integration, we set up a sort of ‘reception area’ on the platform where leaders of each strategic initiative could hang out, answer questions, suggest things people might want to work on. This would help people get involved and take those first steps into contributing to the project.

Using Open Social’s Topics feature, we added separate online spaces around some strategic initiatives related to ways in which we are driving the Drupal project forward. Different Topics pages related to different parts of the open-source initiatives and people working on specific initiatives could then gather there to discuss ideas and collaborate.

This is how we imagined it would work: people would come to the BigBlueButton ‘reception area’ and then leave to go to specific Topics where they would work on the specific projects. We imagined these Topic pages as the big round tables that we usually have at in-person Drupal events.

What we found with many people was that, as they came into the ‘reception area’, they wanted to stay there! They wanted that immediate visual connection with one another made possible by BigBlueButton. So, we decided to use this area and create a new break-out room system for people who wanted to hang out more. People who were contribution event veterans would then more easily go off and work separately using the Topics page. But more and more of the new people wanted the immediate virtual face-to-face experience that using BigBlueButton in the ‘reception area’ offered.

We started and ran the first day and we learned some early lessons and we adapted and changed quickly. One of the great things we found was the combination of BigBlueButton and Open Social was that it is really flexible. We were able to take what we did on the first day, find any challenges we had, and change how we were presenting the events. For example: by adding breakout rooms to the ‘reception area’.

We were able to easily change our process to help people get involved in contributing to the Drupal project throughout the week. And it was really easy to do. We were able to set things up that when a meeting ended, or someone left the meeting at the end of the day, they could be redirected to a page that had activities that they could do later to get more involved.

We wanted attendees to be able to easily get the content they need, and follow a route on the platform to where they needed to be. We wanted to make their journey as simple as possible without having to rely on them having to look up random links in emails to find the right event information. It was all in one place—everything was together—and it was always consistent across each day. And it will remain consistent if they go to the next event where we use the platform again!

How we measure success

But how do we actually measure the success of a Drupal contribution event? We don’t necessarily want to measure success in terms of the number of people that turn up. That doesn’t matter in the long run of the project. What matters is: who turns up to continue working and contributing in the weeks and months after the event.

What we are seeing from DrupalCon is a great amount of success in this regard. We are seeing people who never contributed to Drupal before who are now getting involved. If we can do more of that—then we know it is a success.

Watch the webinar for the full discussion as well as a presentation from Open Social CTO Bram ten Hove and WITS CEO Hodba Khalaf: